A collection of the best Pope Francis quotations. 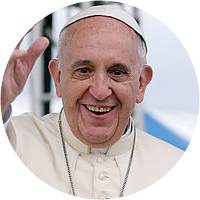 (on being chosen as Pope)
(when offered a platform at his first appearance as Pope, which would place him above the cardinals around him.)
(On What the Catholic Church Owes Its Parishioners)

(on his mission as Pope)

(on technology)
(first words to the crowd at St. Peter's square in Vatican city after his introduction as Pope)

(when offered a ride in a limo after becoming Pope)

(on his appointment as Pope, before appearing on the balcony to greet people in St. Peter’s Square in Vatican City)

(On Washing the Feet of AIDS Patients)

(on baptizing the children of single parents)

(on being chosen as Pope)

(On the Death of Argentinian President Néstor Kirchner)

(on the role of the Pope)

(commenting on the media)

(on the Church in Buenos Aires)

(on baptizing the children of single parents)