A collection of the best Winston Churchill quotations. 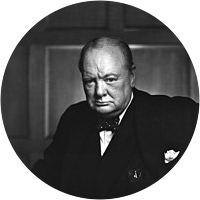 (The 1943 Bengal famine, during which 1.5 to 3 million Indians died, was a result of Churchill's decisions to divert grain supplies from India to storage warehouses in case they were needed during World War II on the eastern front. In spite of repeated warnings about the famine, Churchill forced food to be exported out of India.)

(When asked to explain his refusal to send aid to victims of the Bengal famine, which was a direct result of Churchill forcing food supplies to be diverted out of India, and in which 1.5 to 3 million people starved to death.)

(Hitler asked this question to Russian ruler Stalin in Moscow in 1944 as World War II was coming to an end and Churchill was looking to maintain and expand British colonies.)

(As World War II was coming to an end, Churchill ordered the bombing of Dresden on Feb 13, 1945. Over half a million German civilians and refugees, mostly women and children, were murdered by British and American air forces on that day when 700,000 phosphorus bombs were dropped on Dresden.)

(On Mussolini, the fascist dictator of Italy, after a visit to Rome in 1927.)

(on Mahatma Gandhi's meeting with the Viceroy of India in 1931)

(addressing the Peel Commission on Palestine in 1937 on why Britain was justified in deciding the fate of Palestine.)