A collection of the best Maya Angelou quotations. 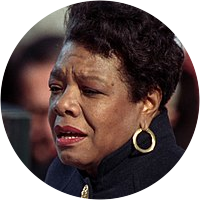 believe in yourself self-respect

(Maya Angelou was at a protest rally in Ghana marching against racism in America outside the American embassy in Accra. When the protestors were outside the embassy, two soldiers came out to raise the banner.)

(in response to the Sandy Hook elementary school shooting in Newtown, Connecticut on December 14, 2012 in which 28 people died.)