A collection of the best John F. Kennedy quotations. 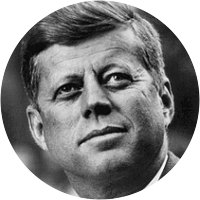 (When asked what is his favorite song)