A collection of the best C. S. Lewis quotations. 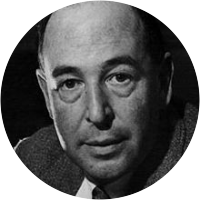 (In the preface for The Collected Letters of C. S. Lewis, Walter Hooper writes "He [Lewis] told me that in writing letters, as well as books, he always ‘whispered the words aloud’. Pausing to dip the pen in an inkwell provided exactly the rhythm needed. ‘It’s as important to please the ear,’ he said, ‘as it is the eye.’)

(C. S. Lewis writes that you can be good for the sake of goodness but you cannot be bad for the mere sake of badness. You can be kind even if doesn't give you pleasure and you are not feeling kind, simply because kindness is the right thing to do. But no one does a cruel deed simply because it is wrong to be cruel.)

free will good and evil

(C. S. Lewis is writing about chastity and how opinions of different generations differ.)

(C. S. Lewis argues that since God has granted humans free will, this necessarily means God cannot control our actions and the pain and suffering they cause -- both to ourselves and others.)

(by "one who uses a celestial chart", Lewis means someone who is religious and believes in God.)

(C. S. Lewis is defining and describing Joy as an unsatisfied desire which is itself more desirable than any other satisfaction. In that, it is similar to happiness and pleasure because having tasted it once you want it again. But it is also similar to unhappiness or grief in quality because it is unsatisfied desire.)

God Jesus religious the self

(Lewis is writing about miracles and if they are possible. He says we can look at our experience but our senses deceive us and cannot be truted. We can look at history but that won't help because either because historical inquiries cannot allow us to mathematically prove anything.)

(C. S. Lewis is arguing that it is impossible for God to grant humans free will and then simultaneously stop bad acts (and resulting pain) from occurring. These are mutually exclusive.)

(Lewis was born Christian and baptized but became an atheist in adolescence. He later became a devout Christian in adulthood.)

(C. S. Lewis succintly summarizes the objections and arguments of atheists in this opening paragraph of Chapter 2 (Divine Omnipotence) of his book The Problem of Pain. He then proceeds to counter-argue.)

(C. S. Lewis is describing 3 experiences in his early life that exposed him to the feeling of Joy. Here he says that the only quality common to the 3 experiences was joy, and proceeds to define joy.)