A collection of the best Samuel Johnson quotations. 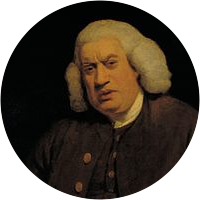 (This quote evolved from Dr. Johnson's allegorical story "The Vision of Theodore" in 1748. While he did not use this precise phrasing, Maria Edgeworth expressed the idea more succinctly in her book "Moral Tales for Young People" in 1806. Over the years, the quote morphed and was still ascribed to Dr. Johnson. This is a more modern version of the sentiment. More history is available at https://quoteinvestigator.com/2013/07/13/chains-of-habit/)