A collection of the best Charlie Munger quotations. 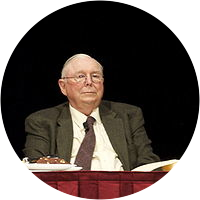 (on the difference between an excellent company and a mediocre company. Excellent businesses have major problems infrequently. Mediocre companies (or industries) tend to have more frequent problems. )

(re-assuring investors that Berkshire Hathaway has invested in great businesses that will continue to generate good returns even after Warren Buffett and Charlie Munger are no longer involved.)

(on companies buying other companies. If a great company buys a mediocre company the result will not be great.)

(commenting on the collapse of Long-Term Capital Management (LTCM), a hedge fund that was founded and advised by very smart and prominent people, including winners of the Nobel prize in economics.)

how to live life reading

(explaining that it's possible that technological innovation reduces costs but that the cost reductions benefit the customer instead of the business.)