A collection of the best Steve Jobs quotations. 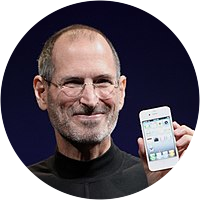 (introducing the iPhone)
(on the 47 Mac team members who signed the plastic mold casing for the ﬁrst Macintosh.)
(on the first NeXT computer)

(On Microsoft's newest version of Windows)

(On Jobs' relationship with Bill Gates)

(When Steve Jobs was in 4th grade, his teacher Imogene Hill asked her class,"What in the world don't you understand?" Steve Jobs raised his hand and said this.)

(On the rest of the computer industry's attempt to come up with a tablet modeled after the iPad, March 2, 2011)

be yourself how to live life

believe in yourself faith

(On redesigning the Apple store layout by "solution zones," after employees initially protested that they would have to start over.)

(on his sister, Mona Simpson, who is a novelist.)

(on what he wants to pass on to his children)

(on the release of the iMac. In hindsight we see that this was incredibly prescient because Apple invented the iMac, iPod, iPhone and iPad in one decade.)

(on rumors of a takeover of Apple by Oracle's Larry Ellison, restoring Jobs as the CEO)
(https://www.youtube.com/watch?v=FF-tKLISfPE)

(on the iTunes music store)

(On dropping Flash on Apple products.)
(on Toy Story)

(on whether it's a problem that Apple's share of the PC market is smaller than Windows PCs.)

(Jobs took the helm at Apple when he returned in 1997 and re-organized the company.)

(on choosing to locate Apple stores in high-end malls where real estate is expensive.)

(This is Jobs' definition of Apple's business model.)

(Isaacson describing Jobs' home. Isaacson said, "His house in Palo Alto is a house on a normal street with a normal sidewalk. No big winding driveway. No big security fences...You could walk into the garden in the back gate, and open the back door to the kitchen, which used to not be locked. It was a normal family home and he said, [followed by this quote].)

(on Apple's performance when Jobs wasn't working there)

(In the summer of 1974, Jobs went to India on a spiritual journey. Neem Karoli Baba was a Hindu teacher that Jobs had hoped to meet but he had died before Jobs got there. Jobs realized there that enlightenment and great ideas are empty if they are without action.)

(Jobs' comment to President Barack Obama in one of their meetings.)

(on getting fired from Apple in 1985 after the company's board of directors sided with CEO John Sculley, who had a different vision for the company than Steve Jobs.)

(on his return to Apple)

(Jobs recalls when he met his wife, Laurene Powell, at Stanford where he gave a lecture that she attended.)

(In response to the question, "What can we learn from Apples struggle to innovate during the decade before you returned in 1997?")

(on building electronic products by assembling Heathkits, which provided instructions on how to assemble a product and so you could really understand how stuff is built.)
(on the design of the iPod)

be yourself how to live life

(on the technology Xerox developed that Apple brought to market)

(on his relationship with Apple co-founder Steve Wozniak)

(on the design of the iMac)

death how to live life

(on his return to Apple)

(on the role of technology in education)