A collection of the best Rudyard Kipling quotations. 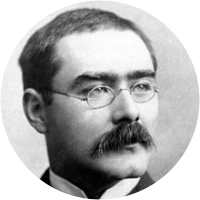 ("The Betrothed" begins as follows: 'You must choose between me and your cigar.'—Breach of Promise Case, circa 1885. Open the old cigar-box, get me a Cuba stout, For things are running crossways, and Maggie and I are out. We quarrelled about Havanas—we fought o'er a good cheroot, And I know she is exacting, and she says I am a brute. The poem ends thus: Open the old cigar-box—let me consider anew— Old friends, and who is Maggie that I should abandon you? A million surplus Maggies are willing to bear the yoke; And a woman is only a woman, but a good Cigar is a Smoke.)

(In the poem "If" where Kipling outlines what it means to be a man.)