A collection of the best Muhammad Ali quotations. 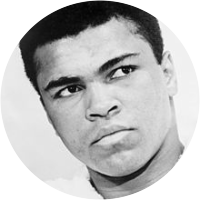 (on his illness (Parkinson's disease), which he battled for over 30 years)

affirmation believe in yourself

(before his comeback fight in 1971 at Madison Square Garden against "Smoking Joe" Frazier. Frazier went on to win.)

(after his fight against Jimmy Ellis in 1971. The referee stopped the fight in the 12th round.)

(before his 'Thrilla in Manila' fight with Joe Frazier)

believe in yourself faith

(before his legendary 'Rumble in the Jungle' match against George Foreman)

affirmation believe in yourself

("The Silent Warrior", dedicated to Joe Frazier whom Ali trash talked when they were boxing rivals.)
(after losing to Ken Norton in 1973, despite 5-1 odds in his favor.)

(on getting hurt in boxing.)

(on how the hopes and dreams of Black America were riding on him, and how he took on this responsibility.)
(Aimee Lehto is a copywriter. This quote is actually from an ad copy for Adidas where it was superimposed on pictures of Muhammad Ali. So the quote is frequently misattributed to Muhammad Ali.)

(before his match against Ernie Terrell in 1967)
(after his 'Thrilla in Manila' fight with Joe Frazier)
(after winning the gold medal at the 1960 Olympics in Rome)
(in response to the question "What would you like people to think about you when you've gone?")
(refusing to be conscripted to fight in the Vietnam War (1967))

(refusing to be conscripted to fight in the Vietnam War (1967))

(before his legendary 'Rumble in the Jungle' match against George Foreman)
("I am the Greatest", a poem composed by Muhammad Ali (then known as Cassius Clay) in 1964)
(before his 1963 match against Sonny Liston)