A collection of the best Joseph Conard quotations. 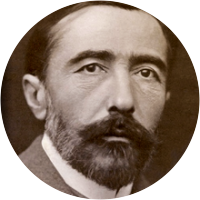 life as a journey aspiration purpose of life