A collection of the best Ram Dass quotations. 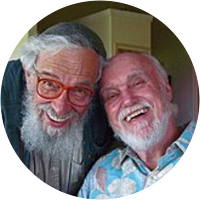 spiritual how to live life

(Ram Dass' spiritual guy and his mystic disciples did not want him to publicize their location to his Western friends.)

(Ram Dass is describing his early experiences with Psilocybin. He and his academic colleagues had interesting psychedelic experiences with the drug. But they felt they could not do justice do it by describing it in words to their other colleagues who were curious but did not want to try it on their own.)
(Ram Dass became a disciple of a mystic in India, who Dass felt could read his mind. In the book, Ram Dass describes his experiences with this guru and how he knew not only things about Dass' life he hadn't told anyone, but also things he had merely thought about without telling anyone.)