A collection of the best General Charles DeGaulle quotations. 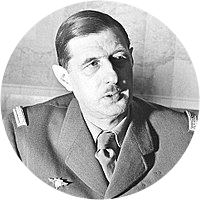 (When a journalist asked him if he was happy)