A collection of the best Billy Graham quotations. 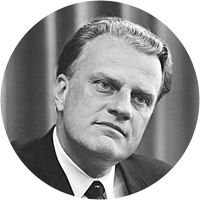 (Graham writes this in the context of an example of the power of Nature over man's technology. Specifically, he was referring to 2012 Costa Concordia disaster where an Italian cruise ship capsized and killed 33 people.)

(Graham says that the greatest legacy you can pass on to your children and grandchildren is not your money or the other material things you have accumulated in life.)

(Graham uses the example of the Biblical character Barzillai who helped King David and his fleeing band of men to show that old people can contribute meaningfully to God's work.)

(Graham is saying that this is the first lesson we can learn from Biblical characters who were old but made meaningful contributions, such as Barzillai, Zachariah and his wife Elizabeth (parents of John the Baptist), Moses and Joshua.)

(Billy Graham writes that this is the main message of the Gospel.)