A collection of the best Robert Ingersoll quotations. 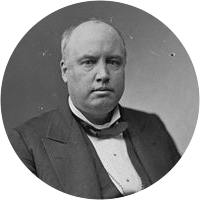 (on Walt Whitman’s Leaves of Grass)