A collection of the best Anthony Bourdain quotations. 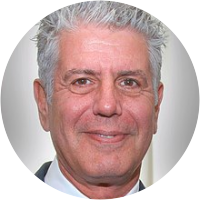 (on being troubled troubled by the fact women he was close to were not comfortable speaking to him.)

(the Impossible Burger, a plant-based burger alternative that aims to replicate a real one, without the environmental consequences)